We have now decided to revamp our cinema demonstrations by building a permanent recessed solution. This would not have sounded any good a few years ago however two technical advances have changed all that.

The first is the latest evolution of UniQ that started in the Kef Blades around 7 years ago. This gave an off-axis response an order of magnitude above previous UniQs and several orders of magnitude over anything that other manufacturers were attempting. The unique Z flex surround and tangerine waveguide both added massively to this performance. If you are as geeky as us and want to more about polar dispersion then read this:            Speaker White Paper

The second is the advent of computer based processing set-ups such as Audyssey, Dirac and Anthem Room Correction. While the manufacturers will tell you that this fixes room issues they are telling a half-truth. They cannot fix an uneven dispersion which is exaggerated with every surface that it is reflected off. They will help, but achieving an even 360 dispersion and then running their set-up is what is really needed so it is both parts together that have given us the big advantage in our recent in-wall and in-ceiling installations.

Atmos is another recent development adding another dimension of height to cinema sound. Now don't think that I don't like Atmos, just understand that adding Atmos provides an extra effect, it doesn't make your system any clearer or help you to make out the words or instruments any better. That means that it has a role, just not at the expense of important performance! Our updated room has Atmos from ceiling speakers and it sounds great! 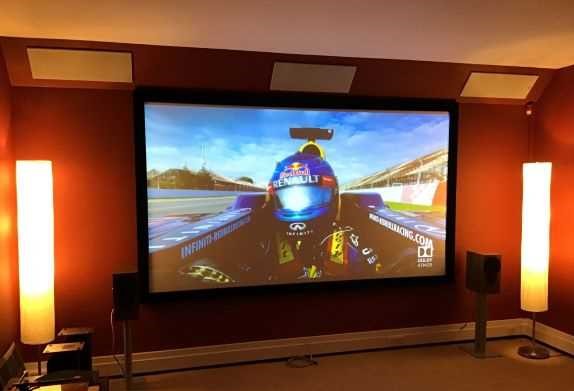 Although there is a pair of R3s on stands all the sound is coming through the three recessed speakers at the top. These are Kef R series in-wall called Ci3160, amazing speakers at £ 1250 each. For rears we are using the super-slim Kef T series and Atmos is provided by Ci160QRs. Currently using a massive Velodyne subwoofer the Kef R400 will also be demonstrated. The projector now running is the Sony VPL570 4K at a mere £ 7995

If the picture looks a little washed out that's because the lights are on full brightness so that you can see the speakers. 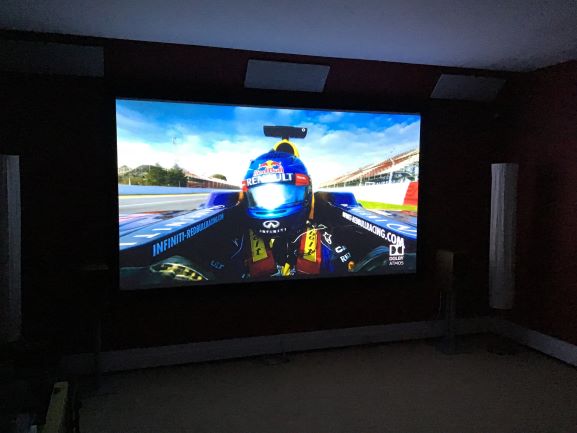 Does that look better?

4k projectors are full of lies in the description. I saw a projector recently described as 4kUltraPro and guess what? It wasn't actually 4k at all !! It could show a 4k picture in normal high definition!

Still really like the Sonys, the VPL VW270 at £ 4999 is the model we use most. Amazing picture and great value too.

While we like Marantz amplifiers we also have Anthem and Arcam models that offer more clarity, better calibration and more dynamics for a little bit more money. Arcam models have some upgrades coming so watch this space around November time.

Now that we are up and running you can have a demonstration anytime, just drop us a line for an appointment as some elements will change for specific needs and budgets. As an example I'm playing it this weekend with the Anthem MRX520, their entry level amplifier at £ 1649. It's 5.1 so no Atmos. Their compromise to keep the cost well under 2k is to leave out the extra channels, streaming etc and provide you outstanding sound from 5 speakers. Great choice if you don't need more than 5 speakers!

Come and check it out for yourself